A few weeks ago we were watching a football game and the announcers mentioned that one of the players was questionable for the game due to ‘vertigo like symptoms’.  I didn’t really say anything but I thought it was kind of odd.  I’d never had vertigo but I didn’t think it was a serious enough condition to keep someone out of a game.  I know that it can be a symptom related with head injuries and concussions so I let it go at that.

Until this morning, on a normal day I am a bit stumbly first thing in the morning.  I will be the first person to tell you that I am not a morning person in any way, shape or form.  This morning though I was grabbing on to the walls to walk Sully to the door.  My head hurt and I had a lot of sinus pressure and took allergy medicine and some ibuprofen while Sully loaded his work stuff in his car.  After he left I realized that the walls were listing to the left in a slow spin.  I was pretty miserable at that point and it just got worse.  I thought maybe resting in bed would help, not even close.  I immediately got nauseous and then I got sick.  Blah.  Luckily that helped with the room spins although it took me a few hours to feel steady on my feet.

So, I apologize to every athlete that I have mentally questioned about vertigo symptoms because that was fairly miserable to deal with.  Good news on the ankle front, it’s feeling pretty good.  It doesn’t seem to be swelling anymore and I really feel like it is healing at this point.  I still have to take it easy but I am relieved that it’s improving.

Later in the day I was able to get a few things done around the house.  I got the bulk of the Halloween decorations packed up and put away in the garage.  The kitchen table still has the linens and some of the kitchen stuff to deal with but I will take care of that tomorrow. 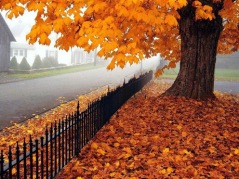 Today I am thankful that I am a stay at home mom.  I can’t ever say how much I love the time that I spend with Boo.  She was so sweet this morning when I didn’t feel well.  I had a drink, she brought me a sandwich and worked the remote controls so I had something to watch.