I mentioned back on December 20th in my Counter this… post that I needed to make some changes to my laundry alcove.  There was too much to do over the holidays, so I put off making any real decisions until after New Year’s.  I originally put it off because I knew that I would avoid stuff that needed to be done to play around with my new area.  Now, I am glad that I put it off.  I got an Amazon gift card for Christmas which I used to order some baskets for the shelves I will be putting together for the alcove.

As ridiculous as it sounds, I am really excited about painting in there.  Since the area is open now I would like to paint the walls a light color.  Our entire house is white, no color on the walls at all.  Except for Boo’s room.  Before Boo was born my sister came over and painted a mural on the walls, a castle on one wall, a magnificent tree on an angled wall in the corner and vines growing up next to the closet so we could track Boo’s height.  It’s very pretty Boo has always loved it and at eleven she’s having a hard time parting with it.  She wants a more grown up room but doesn’t really want to paint over the kingdom quite yet.

Ok, forgive my tangent there, back to an entirely white house.  The shade of white matches very closely with Behr’s Swiss coffee.  It’s a nice color and it works in our house as it’s a very open floorplan.   Saying that, I would love some color on the walls here and there.  I would have to be creative with the color placement as that open floorplan means that the rooms share walls and ceilings.  It would be difficult to paint my kitchen without painting the Great room.   I could paint sections of the kitchen though, like the section of wall between the counter and the upper cabinets.  I am using my laundry alcove as my experimental painting project.

I was talking to Faith about how I was going to stop by Home Depot to pick up some paint color chips to try to see if I could find a good color to go with the washer and dryer set.  Faith told me to let her know what colors I was looking at so she could look up the colors on her color fan.  Several years ago her father picked up the Behr color fan deck when he was at Home Depot.  She got it for free which is pretty awesome because they are $35 on the Home Depot website and $40 on the Behr website.  I had asked about them one time when I was at Home Depot, the person I talked to really didn’t seem to know what I was talking about and wasn’t all that helpful.  After that I gave up on the idea, I was even contemplating spending the $35.  I don’t think I really would have spent the $35 because I would rather spend that money on repairs or decorating.

Today while Boo and I were out with Gramma we stopped by the Home Depot near Gramma’s house.  I picked out some paint chips and then decided to ask about the color fan deck.  I talked to one gal who then referred me to another and this gal actually gave me my own Behr color fan deck.  I was so excited, she only had two left.  She said that the rep from Behr tells them to give them to people that ask.  I am sure people who get them are more inclined to buy paint and other supplies. 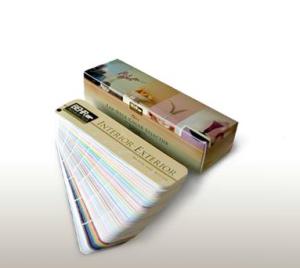 It seems silly but this is pretty nifty.  Faith and I chatted over Facebook looking up colors and using the Behr website to find other colors that coordinate.  I now know all of the groovy colors that she has in her house.    I need to go match colors to my washer and dryer now.