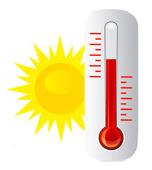 I’ve lived in Arizona all of my life.  The summers are hot, someone suggested earlier that you would get used to the heat or you could be like me and my husband, another AZ native and get to the point where you can’t stand the summer.  It hits 100° mid May, stays 110° and hotter through June and July and if we are lucky it might cool down in October.  One year it was 100° on Halloween, I was not amused.  It makes life difficult and for the past five years or so it’s really affected me.  I know Seasonal Affective Disorder (SAD) is most commonly attributed to the winter months but it can also hit some people in the summer as well.*

The causes for SAD are difficult to  pinpoint, some research blames the lack of light, others suggest that diminished activity may also be to blame.  I think anytime your regular life activities are limited it can cause problems.  If you want to take a walk and you can’t, it doesn’t really matter if it’s too cold or too hot.  It may sound overly dramatic but at times it feels as though you are trapped in your house, sneaking out in the early morning or late into the evening, even then the temperature is often still hovering near 100°.  It can be a bit unbearable at times and in the past I’ve really struggled to stay positive during the summer months.

For several years we would vacation for a week in the later part of July.  We would enjoy the 70° weather and then come back to the tail end of monsoon season.  The temperature would still be 110° plus high humidity and the transition from the cooler weather to the uncomfortably warm would send me into a funk.  In those times I remember feeling very hopeless and trapped.  It seemed a cruel thing to spend a week in nice, cool weather only to once again be dropped into the hell that is Arizona in the late summer.  Again, this will sound overly dramatic but I almost felt like I was being punished.

We’ve since moved our trip into August and that has helped a lot.  Now we spend those hot, humid days preparing for our trip; packing, talking about what day we are going to do what and most of all, looking forward to vacation.  I think this is important, you have to have something to look forward to.  In the past, when we got home we’d have to look forward to the weather cooling down.  At the end of July, October feels really far away.  Now when we get home most of the humidity is gone, the temperatures are a little lower and it seems just that much easier to handle.  Also, we are that much closer to October and hopefully, cooler weather.

Someday we will move out of Arizona.  It’s bound to happen given how much both Sully and I dread the weather here but for now I can deal with the weather as long as I have something to look forward to.

*You can find more info on summer depression at WebMD.