Every year Boo and I work on a craft for Thanksgiving.  Sometimes the Thanksgiving theme is very strong like turkeys and pilgrims.  Other times our project is just autumn inspired, like this year.  We make one for us, and then a couple for family members.

After looking around online we came across some Autumn floral arrangements and liked those.  After that we narrowed it down to door swags.

Today, we got our supplies out and this is our final product.  We made each one a little different, although the flowers were the same in each arrangement.  I bought flower bunches and then used wire cutters to separate the individual flower with the stem.   I added real eucalyptus for color and texture, not to mention the fragrance. 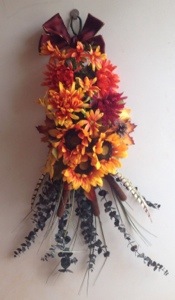 *not the best pictures but the colors and general idea is there.

A few weeks ago I mentioned that Joann’s had a big sale on patterns.  First it was McCalls and then Butterick.  The Simplicity patterns will be on sale later this week.  I bought a bunch of the McCalls and Butterick patterns, the limit was ten and I am sure I came close to that on both occasions.  It’s a little addicting.  The costume patterns are the worst for me, as many as I have there’s always some other pattern that I need to buy.  I always wait for the sales, at $1 each I can’t complain or feel guilty about it.

This is one of my favorite patterns, it was the primary pattern used for my wedding.  Simplicity #8735

This year, I have been able to use a few patterns that I already had to make different pieces for our Halloween costumes.  I’ve done my best to raid all of my various stashes for fabric, trim and miscellaneous notions.   So far I’ve only had to buy a few things and I’ve gotten all of those things on sale, clearanced or with a coupon.

(I tried to add captions but it caused the pictures to go all scatterwhoppy, or even cattywhompus, depending on which you prefer.)

#1- I love the sleeves on this dress, at some point I will have to make this either for Halloween or the Ren Faire. (B4571)

#2 – I grabbed this pattern to make Sully’s pirate costume.  I originally got it for the pants but was surprised to find when I got home that I liked the vest too.  I am hoping to see Sully’s costume to be more like the all black inset pic.  (B4574)

#3 – I am going to try to make boot covers with this pattern.  Since we will be walking a fair amount I want to make covers that we can attach over our comfy cross trainer/walking shoes.  (B5233) 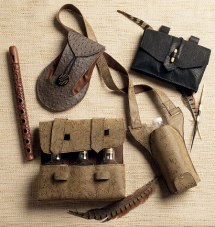 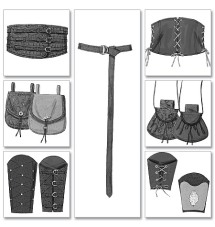 This past weekend while we were running errands I stopped at a few craft stores.  As I work on our Halloween costumes I am trying to rummage through my various stashes of fabric, trim and other supplies to get what I need.  I have some pretty good stashes to raid but there are still some things that I am going to have to buy to get everything completed.  As a rule, I don’t buy craft supplies unless it’s on sale, clearanced or I have a coupon.

Joann’s, 5 for $5. I did a fair amount of research on the Butterick website beforehand so I went in armed with a list.  I was able to get almost everything on my list and then ended up getting four more on Saturday, including a pattern for a cute bag that I can make to use with my costume.  The prices for these patterns range from $19.95 to $15.50, so at $1 each it’s worth it to pick up anything that might be useful.   The patterns I brought home added up to $164.60 at the normal, non sale price.  It’s a pretty good deal.

Over the weekend, I found fabric for Sully’s pirate vest clearanced for $1 a yard.  It’s a very, very dark green, almost black.  It has a pin stripe effect that is really cool.  I think it will look great against the white of his pirate shirt. 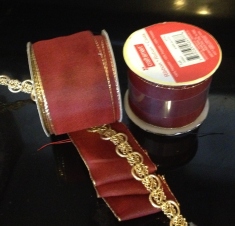 After buying the clearanced fabric we stopped at Michael’s.  On our way out I saw a clearance display of ribbon for $1 a spool.   Boo and I dug through the bin and found ribbon that we can use for our hats.  The deep red with the gold edges perfectly matches Boo’s skirt.  I had the gold trim from a previous project that Boo really liked.

.I didn’t find anything that matched my colors exactly but I liked the sheer ribbon with the sparkly stripes, but it was too sheer to be used for the hat.  I found the silvery blue ribbon and decided to see how they looked layered.   I like the two ribbons together.  My pleating is completely haphazard there, I just wanted to see how it would look.  I will add some sort of thin decorative trim like with the red ribbon.  I seriously can’t believe that I got all of the ribbon for less than $10. 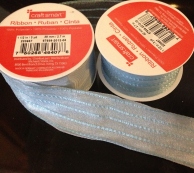 I got my last crafty bargain at Joann’s, I used a 60% off coupon to buy 10 yards of white muslin for our pirate shirts.   It cost less than $12 for the ten yards.

All in all, I think I figured out that I saved over $50 on materials I was planning on buying for the costumes.  If you add in the patterns then I saved over $200 and I only spent about $32 including the patterns.  I love a good bargain.

In my quest to get our Halloween costumes finished early this year, I have been doing lots and lots of online research.  One of the cool things I have found are some really pretty pirate hats decorated with ribbon, lace and other trims by different crafters.  There are a few tutorials but mostly people selling these gorgeous hats on Etsy.com.  I, of course, would like to decorate my own hat, so that it matches my outfit and so that I can add what I want to it.  I’ll write more on that later…

I ordered some hats off of eBay that can be decorated however we want.  They are plain, black, wide-brimmed wool hats that will work perfectly for the pirate costumes.  They are pretty floppy though, and that might it difficult to work on them.  I was toying with different ideas on what I could use to make the whole process easier.  After some thought I decided that the foam forms that you can get at beauty supply stores would probably be the easiest and most economical.  The forms generally run about $5.00 give or take a few quarters.

So after deciding that that the foam forms are what I needed I remembered that the closest beauty supply store had closed a few months ago.  I had already run errands earlier in the day and going out again in 108 degree weather held no appeal.  I took a few moments for a quick internal discussion and started looking at what I could do with what I had in the house.  We have one foam form that we use at Halloween to display one of many masks and/or hats.  I had seen some tutorials on making duct tape dress forms** the other day and I wondered if I could use the same technique to make my own hat display.

I didn’t think to take pictures until I was almost done with the second form so bear with me.

I started with the foam head and covered it with a plastic grocery bag.  I used strips of duct tape around the neck the part to hold the bag down and pull it tight around the form.  Next I started ripping strips of duct tape and wrapping the plastic covered foam form.  I split the strips vertically, some half the width and some in thirds.  I used the third widths across and along the nose and eyes to contour to the shape of the form.   The half widths I used starting along the jawline and moved up the side of the form.  I also put a long piece of tape down the center starting above the nose and continuing down the back of the neck.  I continued to lay down strips until the entire form was covered.  I did my first layer with a solid color duct tape and a decorative duct tape for the second layer.  The second layer is just like the first, I was just more careful to smooth down the duct tape.

I used plastic grocery bags and crumpled up newspapers/ad mailers for stuffing, I was careful to fill in the contoured areas with the bags and filled the center with the crumpled paper.  I traced the bottom of the foam form on cardboard and cut it out.  After it was filled as much as it was going to be I put in the cardboard and covered it with the decorative duct tape. 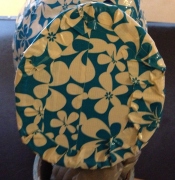 Here are the final results.  Now I have two hat forms that i can stick pins into and keep the hat in place while I work on decorating them.  Clearly, I could have bought two of the foam forms for about $10 and in about a third of the time that I spent making these.  For me, it was about being resourceful and using the materials that I had close at hand.   I am pretty pleased.

I am a bit excited about our upcoming trip to Disneyland and to Mickey’s Halloween party.   I’ve decided to get a jump on the costumes, especially since last year was a ten day marathon of cutting, pinning and cutting.  I am hoping the preparation this year will be a bit more relaxed.

This weekend I spent some time looking at some different costume ideas.  We’d decided on the pirate theme earlier this year so at least I am that far along.  Of course, you’d be surprised at the different options for pirate costumes, especially given the many costumes featured in the Pirates of the Caribbean movies.  We have the added factor of getting on and off of rides at Disneyland to think about when choosing a costume.   I liked different elements of these costumes, which I found at Spirit Halloween.  I like the asymmetrical skirt on the first and last ones and the vest and hat options on the other costumes.  Overall, though my costume will need to be a little less sexy, I want to go more for cute and sassy.  It is for Disneyland after all.

My plan is to make a skirt similar to the first picture but not as short in the front and not as long in the back.  This weekend I started looking through my patterns and fabric.  I remembered that I bought a remnant of some pretty brocade last Christmas.  I think it will make a really pretty vest.  I originally planned to make a loose fitting corset but even loose fitting boning might be a little painful for the rides.

So, with that I decided on a color scheme; white pirate shirt, the teal/blue brocade for the vest, black skirt and white underskirt.  I will probably make some black boot covers, more on that in a few weeks.

I started on the white underskirt, cutting out a modified circle skirt.   Then I started to cut the skirt into the shape that I wanted.  I’ll be adding about six inches of lace to the bottom edge and another tier above that. 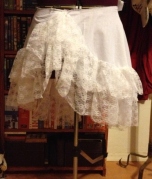 I have a lot of lace that my grandmother gave me, it had already been cut into pieces about 10″ x 14″.  I sewed several pieces together along the t14″ side and then cut the whole chain in half to make a 7″ wide strip.  Then I had my two tiers of lace for the skirt.

Now I just have to work on the overskirt and attach it all to a waistband.