My daughter’s bestest bud from Hawaii was in town visiting family, and they invited us along on an overnight trip to Flagstaff.

We hiked one of the trails at the Walnut Canyon National Monument. The Island Trail is a loop that takes you right past and even throughsome cliff dwelling rooms/ The loop is only a mile long but is a bit strenuous due to an altitude of 7,000 feet and the 185 foot vertical descent into the canyon, and the return ascent. It’s a great hike and even though I nearly died on the way back up the stairs I had a great time. 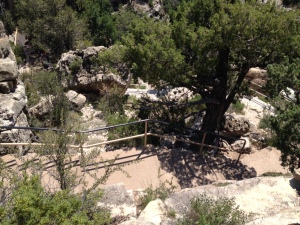 We had fun shopping at Heritage Square.

Saying hi to the carriage horse.

We saw this cute Airstream trailer at The Big Heap Vintage, Antique and Handmade Design Festival. There was a lot of groovy stuff at the festival like antique furniture, pretty ironwork, vintage trunks and suitcases. There was some beautiful handmade work too, there was a booth with Steampunk fashion, including some niftyhats and jackets. Another booth had some really intricate wire and resin butterfly jewelry.

I’ve written about the difficulty getting started, expectations, negative thoughts, being honest and making time for important stuff.  I think the most important factor in achieving success is the support I am getting from the people around me.

I honestly feel blessed that I have such a good support system.  Sully and Boo are behind me 100% in everything that I do but they’ve been extra awesome with my plan for the New Year.  Boo has been an inspiration to me, she started exercising on her own at the beginning of November.  She’s been playing Dance Central for Kinect and dances for an hour everyday.  Between the dancing and giving up soft drinks, she has lost nearly ten pounds and she looks even more beautiful than before.

I’ve also have great support from my friends.  Faith, of course, has been a source of support all year.  Now she is a source of inspiration, she’s been on Weight Watchers and has lost nearly 40 pounds.  What’s really amazing is that she had to have back surgery in June.  From January to mid July, she lost weight just by eating a healthy diet.  She was in so much pain before the surgery that walking, standing or sitting for any length of time was impossible.  After the surgery she started walking as part of her rehabilitation and now she walks 3 to 4 miles everyday.  I wish I had started walking with her (remotely, of course, since she’s in CA and I am in AZ), I’d love to be walking that far everyday.  Now, Faith is only ten pounds away from her goal weight and being a life time WW member.  I am so excited for her.

Another friend, Val has been working on her fitness and diet too.  Val has started playing hockey again and every week I hear how much fun she’s had.  Playing hockey burns calories like crazy all that skating around and Val is a fast skater.   As hard as she’s been playing hockey she’s been working on the diet even more.  Val been slowly moving the family to a gluten free diet mainly for her son’s health.   She has also lowered her sodium intake after a high blood pressure scare at the end of the year.  Val has already lost ten pounds just from lowering her sodium intake.

How can I not be inspired by them?  Faith and I chat daily over Facebook, there’s occasional whining, always listening and a lot of cheering each other on.  It really helps to have that daily conversation about how things are going.  It makes everyday that I keep going an accomplishment, one more thing to cross off of the list.  Val and I message over  Facebook, bragging about our accomplishments or whining about our lack of motivation.  It’s a great thing and I am so thankful.

I guess I should go take my walk so I can let Faith and Val know how far I walked today.

It was a great walk.  12 minutes and 0.68 miles at my fastest pace yet.  It’s not a long walk but I am still trying to get used to setting aside time for exercise.  This is big.

My upper body workout really makes my shoulders sore.  At least I am able to finish each set strong.  Next phase, I will have to think about adding reps or sets.

I mentioned back on December 20th in my Counter this… post that I needed to make some changes to my laundry alcove.  There was too much to do over the holidays, so I put off making any real decisions until after New Year’s.  I originally put it off because I knew that I would avoid stuff that needed to be done to play around with my new area.  Now, I am glad that I put it off.  I got an Amazon gift card for Christmas which I used to order some baskets for the shelves I will be putting together for the alcove.

As ridiculous as it sounds, I am really excited about painting in there.  Since the area is open now I would like to paint the walls a light color.  Our entire house is white, no color on the walls at all.  Except for Boo’s room.  Before Boo was born my sister came over and painted a mural on the walls, a castle on one wall, a magnificent tree on an angled wall in the corner and vines growing up next to the closet so we could track Boo’s height.  It’s very pretty Boo has always loved it and at eleven she’s having a hard time parting with it.  She wants a more grown up room but doesn’t really want to paint over the kingdom quite yet.

Ok, forgive my tangent there, back to an entirely white house.  The shade of white matches very closely with Behr’s Swiss coffee.  It’s a nice color and it works in our house as it’s a very open floorplan.   Saying that, I would love some color on the walls here and there.  I would have to be creative with the color placement as that open floorplan means that the rooms share walls and ceilings.  It would be difficult to paint my kitchen without painting the Great room.   I could paint sections of the kitchen though, like the section of wall between the counter and the upper cabinets.  I am using my laundry alcove as my experimental painting project.

I was talking to Faith about how I was going to stop by Home Depot to pick up some paint color chips to try to see if I could find a good color to go with the washer and dryer set.  Faith told me to let her know what colors I was looking at so she could look up the colors on her color fan.  Several years ago her father picked up the Behr color fan deck when he was at Home Depot.  She got it for free which is pretty awesome because they are $35 on the Home Depot website and $40 on the Behr website.  I had asked about them one time when I was at Home Depot, the person I talked to really didn’t seem to know what I was talking about and wasn’t all that helpful.  After that I gave up on the idea, I was even contemplating spending the $35.  I don’t think I really would have spent the $35 because I would rather spend that money on repairs or decorating.

Today while Boo and I were out with Gramma we stopped by the Home Depot near Gramma’s house.  I picked out some paint chips and then decided to ask about the color fan deck.  I talked to one gal who then referred me to another and this gal actually gave me my own Behr color fan deck.  I was so excited, she only had two left.  She said that the rep from Behr tells them to give them to people that ask.  I am sure people who get them are more inclined to buy paint and other supplies.

It seems silly but this is pretty nifty.  Faith and I chatted over Facebook looking up colors and using the Behr website to find other colors that coordinate.  I now know all of the groovy colors that she has in her house.    I need to go match colors to my washer and dryer now.

Today, I am borrowing the blog post from Re-inventing Fabulous again.  We are putting up lights again, this time for our friends, family and anyone else that had gotten us through our dark days.

“We need lights for our friends today…Let’s really light this sucker up with our friends, even the difficult ones (and we all have ‘em).”

Today, I am putting up lights for…

Sully – I wouldn’t get through the day without my best friend and soulmate, my husband.

Faith – my BFF, the ‘sister’ that I met in college, we chat daily via Facebook.

Val – met in Russian 101, twenty four years ago and always pick up where we left off.

My ReFab and Betty friends, who have helped me through this last year even though I lurk more often than I post.

Lighting it up for all of them and a few more.

Ok, so far so good.   I am sticking with my goals and I am feeling pretty good about it.  I am liking the 21 day plan.  I think it’s a perfect amount of time to get me focused with out it dragging out too long.

Today, Boo and I met with Val and Kayla for lunch and then we went bowling again.  Good times had by all.  We all did much better this time, of course, maybe the bumpers helped a little.  Just a little though.  🙂

Our day started out early, Lilo was with us again today.  She was very low key this morning though.  She curled up on the couch with a pillow and watched her some movies.   I got a bit done while she was resting.

Tia came about an hour later and we all went to lunch.  Lilo and Boo played in the little play area, well, Lilo played and Boo hung out.  Tia and I got to gab which was really nice.  I am very thankful for days like today.

After Boo’s swim lesson this morning we met with Val and Kayla for lunch and bowling.  Val is the only person of the four that had been bowling before and we expected some interesting moments.  Oddly enough the girls did well, there were more than a few gutterballs but overall they were pretty good.  The only interesting moment happened at the very beginning, Val went first and… well, things didn’t go as planned and I will leave it at that.

I was surprised that I did so well considering it was my first time.  It was midway through the first game when I realized that my usual beginner’s luck was probably in play.  It’s happened before, pretty much any sport and then playing video games with Sully.  He got a new fighting game a few years ago, I played a few games with him and completely kicked his butt.  Once he figured out the controls though I was toast, for the most part I am just a button masher.  Bowling was fun though, I won the first game by one point and came in second, only nine points behind in the second game.  Pretty good for my first time but yeah, I know, it was probably beginner’s luck.