When I first injured my foot I did some online research, that is how I discovered that it was a high ankle sprain.  I also got some information on treatment and recovery.  Pretty much everything I read claimed that it would take at least six weeks for it to heal.  I’ve sprained my ankle before and it’s taken only about 10 to 14 days to heal.  There might be some residual effects as my ankle strengthened but six weeks just seemed ridiculous.

Today was the first day that I didn’t wear my ankle brace all day and I did pretty well.  We walked all over Costco and then later Sam’s Club because we forgot to look for the gingerbread house at Costco.  Later, I put the brace on briefly while moving Christmas boxes out to Sully’s mom’s garage.  I was concerned about negotiating that step down into the garage while pulling a two wheel dollie.   I took it off afterward though and had no significant issues.  Once getting into the car I bent my ankle a bit and felt a twinge.

I was glad I was that I was finally feeling like my ankle was healing.  The ankle brace wasn’t an issue except when I was wearing shoes.  I mostly wear Crocs around the house and I didn’t have a lot of problems with the brace interfering with them.  My running shoes though were another matter, the shoes were not comfortable at all with the brace on.  I ended up wearing my hiking boots everywhere, although I think that turned out to be a really good idea.  The boots gave me extra support and didn’t interfere with the brace at all.  I’ll probably still keep the brace handy in case I am doing anything that might cause a relapse.

Of course, looking at the calendar I find that the six week prognosis is spot on and not ridiculous in the least.  Go figure…

I want a do over for today, but I won’t get it and that sucks.

This morning our dog, Cooper died, it was sudden and unexpected, and we are heartbroken over it.   He was a sweet, black Labrador with a bum leg that we rescued as a puppy.

Cooper didn’t eat the night before and seemed a little tired.  It had been hot and I thought perhaps he was overheated.  We game him a bath to cool him down and then let him dry off and snooze on the tile in Boo’s bathroom.  The next morning I went in to check on him he was still on the floor but in a different position.  I got something to drink, booted up my computer and went to feed the dogs.  I walked down the hall and saw that Cooper was all laid out, and he was gone.

I feel guilty that I didn’t do more.  I feel guilty that he died alone in the bathroom. I just had no idea.  I was very grateful that Boo was still asleep.  I was able to move Cooper and clean up the bathroom before she got up.  Sully came home from the office to help Boo and I deal with it all.  He dealt with the vet and transport.  He was really sweet and took good care of us, even though I was resisting the help.

Unfortunately, we were already dealing with the fact that  today, would have been Sully’s dad’s 60th birthday.  I shared that with Lily and she thought that maybe Papa had decided he wanted a dog for his birthday.  It made me feel a little bit better to think that maybe Cooper went fishing with Papa in the happy hereafter.

Our original plan for the day had been to go to Aunt Lily’s after swim class for lunch and swimming at her community pool.  Yet another swim opportunity messed up by circumstances.  Boo was already upset and I was torn, was it appropriate to go swimming after the loss of a pet?  It sounds silly but if we think of these guys as part of our family what’s the protocol here?  Sully finally saved the day and told me to take Boo over to Aunt Lily’s.  After everything this year with his dad he thought it would be a good idea.  She could get away from the house, do something physical and have some fun.

I agreed but the hard part was leaving Sully behind.  He had come home from the office but was working the rest of the day from home.  I don’t normally go out when  he’s home, we are kind of sappy about spending time together.  Plus, the added emotion of it being his dad’s birthday.  He encouraged us to go and I am happy that he did.  We had a nice time.  Boo swam and practiced what she has been learning at Swim class and we both got to have an afternoon off from thinking about all of the not fun stuff.

My June +1 for today was taking the afternoon off.  I seldom do that and I realize it’s something that I need to do more regularly, not just when something awful has happened.

Often times I hear people commenting on other people’s marriages and how they don’t understand certain aspects of the relationship.  I’ve had conversations with friends about people that are happily married.  Happily married!  Why people would want to find trouble where there isn’t any is beyond me but we all know people who are like that.  My philosophy is basically this, if it works for them what does it matter to me.

My mother used to worry about my sister’s marriage.  Lily and her husband, Hagrid (family joke) like to go camping and take the motorcycle.  So, sometimes if they are going to be gone for more than a day or so they need to take the truck.  Lily drives the truck and Hagrid rides the motorcycle.  My mom was so upset by this, she couldn’t imagine going on a road trip and not spending all that quality time chatting on the way.  Honestly, I love that conversation with Sully and Boo on our way to San Diego or Disneyland too.   The thing is I don’t really care if my sister and her husband rode robotic turtles on their vacation.  It’s their vacation, and if it works for them, then awesome.  Why would it matter what I would rather do?

We go to Comicon every year, the local one in Phoenix and until recently the huge one in San Diego.  My parents, siblings and their spouses looked like we had just announced we were moving to Borneo when we mentioned where we were going.   It works for us and it’s what we do.  I don’t care if my sister wouldn’t go, or she thinks I am crazy for going.  I don’t mean that in a mean way, it’s just the truth.  She loves me and I love her but we don’t have to agree on everything.  I like being out in nature but I don’t really love camping.  Cooking s’mores around the campfire, you bet, sleeping on the ground, not so much.  I think it’s great she and her husband like to do that, more power to them.

In one of the conversations about Lily and Hagrid, Mom started to get upset.  I told her, “Mom, if it works for them, why worry?”  She started to say something and then stopped, and I added, “Would you want to be stuck in a car with Lily for eight hours?”  Of course, that sounds mean but it’s more of a family joke.  Lily grew up with ADHD back in the 70’s when no one really knew about it.  Lily could talk about anything, for hours…  Road trips were crazy because she honestly could not shut herself up.   She’s much better now, as long as she doesn’t drink Pepsi, it makes her hyper.  My mom had similar ‘worries’ about my brother and his wife and probably voiced a few about Sully and me too.  I kept repeating to her, if it works for them why should we care.  I mean if they were having cage fights in the backyard and hurting each other then yeah, we might want to say something.

Talking about going to Disneyland…

Hope:  Yeah, I get funny looks from people when I tell them we go to Disneyland every year and are saving up for annual passes.  I actually had a FB friend that posted that Vegas was Disneyland for adults. I thought ‘uhm, no, Vegas is for people that like to drink and lose money.’ Not that I hate Vegas or anything but it’s so not Disneyland for adults.

We went to Disneyland in 2010 for our tenth anniversary. We actually had more than one person asking if we were leaving Boo with Sully’s parents.  Seriously? Who would leave their kid behind and go to Disneyland? We got married to be a family. Oy

Leah:  Exactly!  We are the same way.

Hope:  I can’t imagine how upset, devastated I would have been as a kid if my parents went to Disneyland without me.

Leah:  I know!!!  Aurora would be wrecked if we did that! Plus, we are a family, and yes dates (far and few between) are wonderful and we need our private time…but seriously!

We had been talking about her parents and her not so much fun childhood and how her parents think it’s ok to give advice on parenting, which is laughable seeing all of  the collateral damage they left behind.

Leah: But I think the big thing is that people look at children as an accessory in their lives (I know my parents do) and Stefan’s family and Stefan and I look at Aurora as our purpose in our life. I know you and Sully are the same way  🙂

Hope: I totally get that. I feel like my whole life I was looking for Sully. Not that I am nothing with out him but that he is so much of a part of me that I felt incomplete without him. Now, that I have that part of me I am able to become who I am supposed to be.              And Boo, she is like the score to a movie. The movie is flat and uninspiring without it. Our lives would be so flat without her.  We are so lucky because Sully gets to work from home three days a week. And with Boo being home schooled we spend a lot of time together. We’ve learned that time is fleeting and we are very thankful for being able to be together so much.

Leah:  That is so beautiful…

We all have a path to take and hopefully we will find someone to walk that path with us.  What we do on that path is  up to us.  🙂

My June +1 for today was drinking three, 240z tumblers of water.

So, today, I didn’t get to my bellydance workout nor did I get any Christmas decorations packed up.  It’s okay, I am sleep deprived, like normal, but worse because of the leaky air bed drama.

Instead of being annoyed, I am going to be grateful.  Today, I am grateful for a great day with Sully and Boo, for silly sitcoms that made us laugh during lunch.  I am grateful that Boo has a great dance teacher, that the kittens are healthy and growing up.  I am even more grateful for friends that read stuff and say “OMG, that’s us!”, for Sully, who does the dishes everyday (seriously, I haven’t done dishes in a month) and for Boo for plowing through the Harry Potter books with excitement. 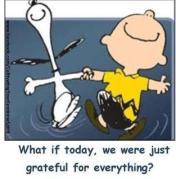